Have you ever played in a band? With all due respect, I’m not talking about your high school or grade school band. Have you ever played in a band for money? Do you know what it feels like to play a guitar, a sax, a piano, an acoustic or electric bass, the drums, or a trumpet, or any instrument, in a band, on a stage, while the crowd claps, sways, and reacts to every note and beat that’s being played? You can’t buy a pill, or any dope, or alcohol that will give you the high, the rush, that playing in a band gives you. When you’re 16, 17 or 18 years old it’s a high you can’t forget.

Somehow, when I was a freshman in 1957, I was asked to join my high school’s big jazz band. I was pretty good on the trumpet. And, I was most anxious to find out if I was good enough to play with them, so I nervously said okay. Our band was loosely fashioned after the Count Basie and Duke Ellington big band jazz bands. 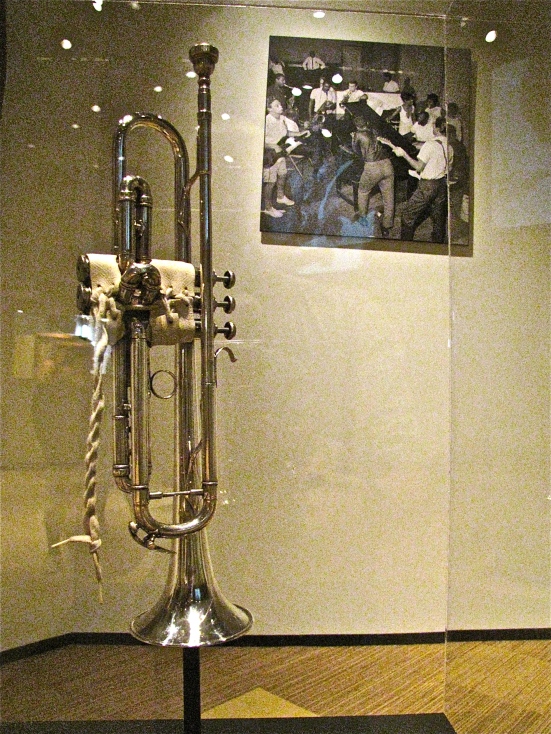 This is not my trumpet.
This trumpet belongs to
STAX MUSEUM OF AMERICAN SOUL MUSIC IN MEMPHIS TN.

I’ll try to explain the high I experienced when I played with them the first time. This was my first time playing in front of a large audience. On the stage, with the curtain closed, I heard the crowd talking and milling around. As soon as the crowd heard us taking our places on the bandstand behind the curtain, playing a few notes just to stay warmed up, they started clapping and whistling. I was nervous. The curtains remained closed when we started playing our theme song, The Baby Sitter Blues. After about 5 or 6 bars, the tall red, velvet curtains began to slowly open. The more open the curtains, the louder they cheered and clapped and the louder we played. Maybe I had led a sheltered life, but the emotional high, the rush, virtually overwhelmed me. I had a hard time playing; all I wanted to do was just sit there and smile and savor and listen to the crowds emotional response to our music. I almost, not quite, but almost, couldn’t believe I was a part of what was causing that audience to feel so good.

Our sound and beat was complete and big.

I don’t want to even pretend, or give you the impression; our jazz band was as great as The Duke or The Count. That was just not possible. However, there’s one dimension of our band’s sound that we had in common with The Duke, The Count and the other great jazz bands. Our sound, their sound was based on natural sound. There was no tall wall of Peavey speakers and amplifiers stretched across the back of our stage. No one was at a control panel, somewhere in the dark, manipulating the sound or the balance of the various instruments, making our band sound louder (or quieter) than we were. Like their bands, our sound was right in your face, unaltered, coming directly from the instruments (not speakers), right in front the audience. What we played is what they heard.

Today, when big jazz bands play, the power of their all-natural sound is still immense and intense. My 2 sons will testify to this intensity, as a result of me escorting them to a Count Basie concert (against their better judgement) when they were in high school, in the 80s. They were astounded, by how loud The Basie Band could play, without “amplification”. My sons loved the music and still do. Even today, when these bands play, there is no wall of speakers and amps. What the audience hears is what the band plays.

To prove it, listen to this recording… DIMINUENDO AND CRESCENDO IN BLUE by Duke Ellington. This arrangement is 15 minutes of high energy, penetrating rhythm, astonishing musicianship and audience participation. What The Duke’s band played, is what the crowd heard. Again, this is honest, unaltered sound. DIMINUENDO AND CRESCENDO IN BLUE becomes more spontaneous with each beat and each note. What you hear was recorded live (1956 Newport Jazz Festival, Newport, RI.), that means there are no studio touch ups on this tape. Towards the end, the crowd is almost as loud as Duke’s band. Saying the crowd is excited is an understatement.

This next video is from a concert in Amsterdam, Holland, 1958. It’s the same piece with a slightly different arrangement. In this video notice the lack of speakers. You see a few microphones scattered about, but that’s it. You’re hearing natural sound, without a lot of manipulation.

Time marches on, but what would be most enjoyable is to have time march to the beat of big band jazz.

9 thoughts on “DIMINUENDO AND CRESCENDO IN BLUE…”